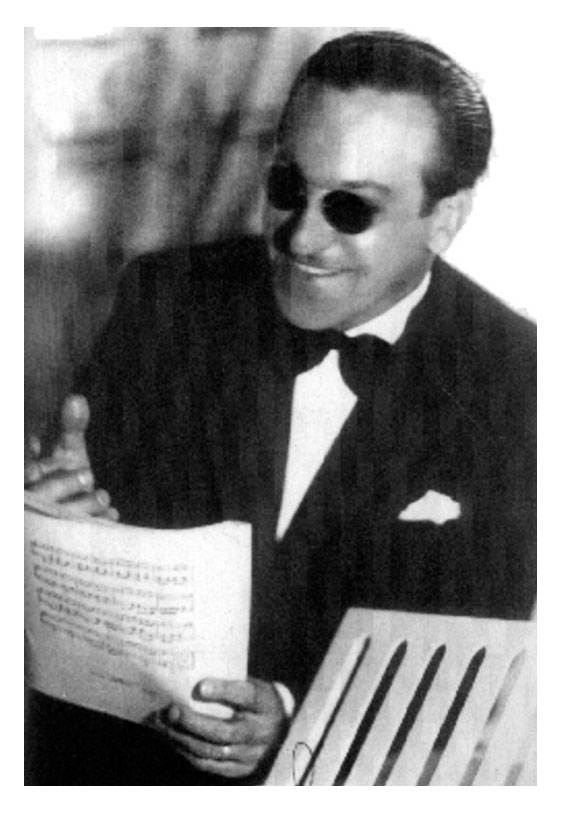 Carlos Di Sarli was born 7. January 1903 in Bahia Blanca, Buenos Aires, Argentina. He started playing the piano early, and when he was 13, he left home to play in an ambulating orchestra. As a child, he got a head injury from an accident in his father's shop and needed to have surgery. Because of this, he would later wear dark glasses to avoid strain.

Carlos Di Sarli played the piano in his own orchestra throughout his career. He has a powerful, rich playing style with clear, shiny treble decorations. His orchestra is recognisable because of a dominant use of violins and very discreet use of bandoneóns. Like the other tango orchestras of the era, Di Sarli's orchestra played music by many different composers. But Carlos Di Sarli also composed some beautiful music himself, like the well-known tangos "Bahia Blanca" and "Verdemar".

Like most of the other tango orchestras we know from the Golden Age period, Carlos Di Sarli's orchestra both played at dances and made recordings. Di Sarli's first recording period was with his sexteto from 1929 to 1932. The next time he recorded was in 1940, now with a larger orchestra. Di Sarli recorded almost every year until 1958, and although his style changes a lot from 1929 to 1958, everything has high musical quality. Maybe this is why we still dance to all Di Sarli's recordings today, even many of the earliest ones.

If you don't see the graphs below, please check that JavaScript is enabled in your browser.

NB Graphs and discography are work in progress, so there might be errors.

TANGO NOTES focuses on the music we use for dancing today. This means that the below charts and discography includes the genres tango, vals, and milonga recorded after 1927.

Carlos Di Sarli recorded only tangos *), valses, and milongas with his orchestra. Most orchestras would also record other popular dance music, like foxtrot, ranchera, and many other genres. The recordings with Mercedes Carné are as far as I know not used for dancing.
The track "Quién sino tú", recorded 1956 with singers Jorge Durán & Roberto Florio, is listed as "Canción tango".


Here's an overview of Di Sarli's recordings, sorted by year and genre.
Hover / tap the circles to see the titles and other details about the recordings!

In the below interactive "Bandoneón chart", you can see which years Di Sarli made recordings, with which singers, and which titles. Hover / tap the buttons to see more information!

The singers in the traditional tango orchestras weren't considered to be big stars, like singers are today. They were just another musician - and most tango orchestras employed different singers. Later, the singer would gradually get a more prominent role in the orchestras.

Hover / tap the bars to see how many recordings Di Sarli made with his different singers, in order of appearance.

Di Sarli recorded mostly work by other composers. But he also composed 30 pieces himself: 24 tangos, three valses, and three milongas. He recorded 23 of these pieces with his orchestra - 15 of them more than once.

Hover / tap the circles to see the titles and other details about the recordings.

NB: work in progress! Most likely some errors.

Get notified about major updates here.

◉ Di Sarli recorded some songs multiple times during his career. Click "TITLE" to see these songs next to each other and compare listening examples.

◉ "Also recorded..." refers to other recordings by Di Sarli, not by other orchestras.